With our latest update we have made it easy for you to ensure that someone on a board team always sees your chat message, even if they are not assigned to that card.

The old rule was that everyone who is currently assigned to a card would get new chat pushed to them as emails.  Now, you can make sure someone gets that email notification right away, even if they aren’t assigned to a particular card:

Using this feature is simple: just type the letter “@” anywhere in your chat message and Kerika offers all the matching suggestions:

“@All” lets you push your chat to every Board Admin and Team Member — something you should do only rarely to avoid annoying people!

Try this feature and let us know if we can improve it.

We got feedback from some users after our last big release on how we could improve the user experience for folks who like to use the auto-numbering feature for Task Boards, and we have made these changes:

When you open a task, it’s number is shown (but can’t, of course, be edited)

It starts at the Home page, where we made it easier to filter you view of Boards and Templates to a subset of all the Kerika accounts you can access:

You can use the check boxes in the left navigation area to temporarily hide some accounts, if you want to narrow your view of boards and templates.

The Board Switcher, which shows all the boards you currently have open, across accounts:

It’s also easy to set your preferences on a per-account basis:

The Dashboard (previously labeled “Views”) has new capabilities so you can get a great overview of all your projects, across all your accounts:

This makes it as easy to filter your Views on desktop as we had previously done for mobile users.

We have redesigned the Task/Card details dialog to provide a more space-efficient layout, so you can see more of what you need without having to scroll:

What used to be vertical tabs for Details, Chat, etc., is now a compact horizontal tab; this frees up a lot of space to see the details of the tags.

The other big change we made is to make the Priority setting separate from other Tags:

Clicking on the star will bring up your task priority options:

We hate to see anyone leave, of course, but that doesn’t stop us from improving the experience of users who want to close their Kerika accounts.

You can do this by selecting the My Profile option in the dialog that appears when you click on your avatar, on the top-right corner of the Kerika app:

Click on the Leave Kerika button, and Kerika will email you a 6-digit numeric code that you can use to confirm that you really want to leave.

This extra step helps ensure that you really mean to do this, because the exit, once completed, cannot be reversed: all your old boards will be deleted permanently:

If you have a engineering background, you will be comfortable calling the items that show up on Task Boards as “cards” — a term that originated with Kanban production lines in Japan, and then found its way to Scrum boards everywhere.

But for everyone else, “card” is a somewhat obscure, even baffling term, and we would often get asked a fundamental question: “what should I put on a card?

To make this clearer to folks, we are renaming cards as Tasks, because that’s what a Task/Card is: something your team needs to get done.

This is really a cosmetic change: wherever you had previously seen the word “card” you will now see either “task” or the more generic “item”.  The ADD A CARD button, for example, is now ADD NEW TASK:

And what had previously been called “tasks within cards” (or sub-tasks), is now more simply called a Checklist:

Again, this is a change in terminology, not a change in functionality, but we hope it will make Kerika easier for the wide variety of users we have across the world, ranging from companies and governments all the way down to schoolkids.

We have added a new function to let Board Admins and Team Members move an entire column of tasks (cards) with a single action, within a single board or across multiple boards in the same account.

The function can be accessed by from the  menu that appears as a pop-up when you click on the dots on the top of each column, as well as when you use the right-click mouse action on any cards:

After selecting a destination board, you can then pick the exact location of the column you are moving, relative to the columns that are already on that board.

And, as you can see, from the screenshot, you are also able to move columns from boards in one account to another account where you are also an Account Member.

With our new user interface we made it easy to see how many tasks (cards) there are in a single column: the count appears at the top of each column.

We have added an Undo option for all Sort actions on Task Boards, to make it easier for you to use the sorting function without worrying about making a mistake.

We have added tablet support for iOS and Android devices, as you can see: 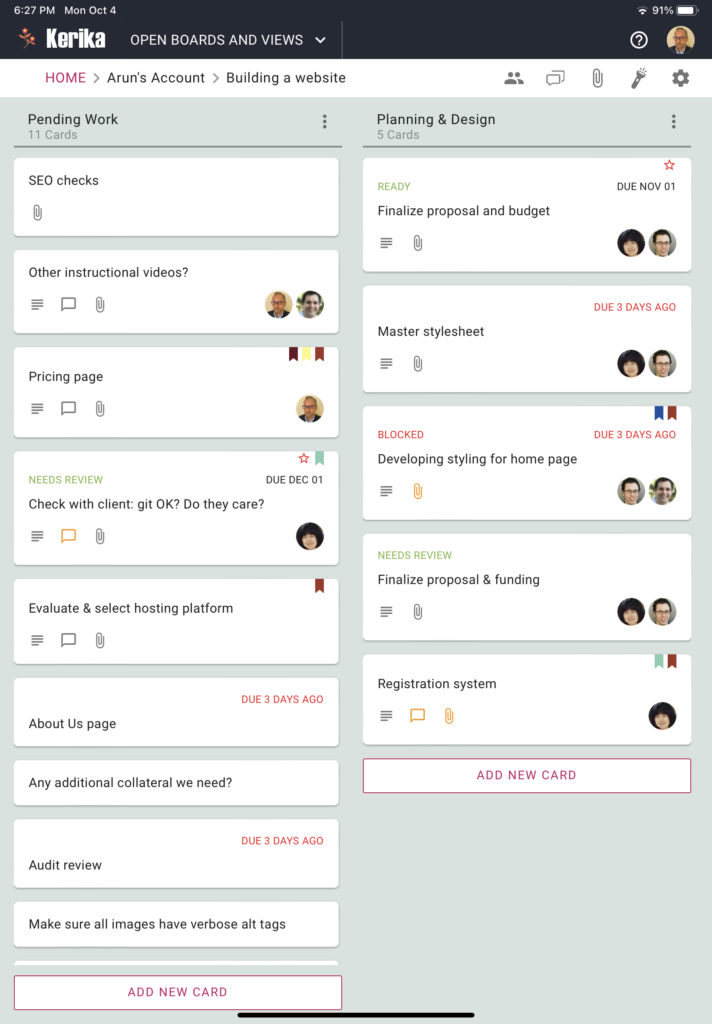 The tablet experience is like that of the desktop, not the phone.

For the phone app we had to redesign a lot of the user interface to accommodate the limited screen space, but with most tablets today there is enough screen resolution to support the more extensive desktop experience.