We have a complete (one-hour long) video of the tutorial presented by Arun Kumar, CEO of Kerika, at the recent Lean Transformation Conference on the subject of Kanban vs Scrum: what’s the difference, and which should you use?

(The slides for this talk, and more, can be found on Slideshare.)

Best Practices for Getting Scrum Right 00:28:00

Question: in Scrum, are units of measure like lines of code still applicable? 00:50:08

Question: how do you measure individual performance? 00:51:03

Question: how do you handle poor performers within a team? 00:52:25

Arun Kumar, CEO of Kerika, and Joy Paulus, Senior Policy and Program Manager for the Washington State Office of the CIO, delivered a joint presentation at the Lean Transformation 2016 Conference. 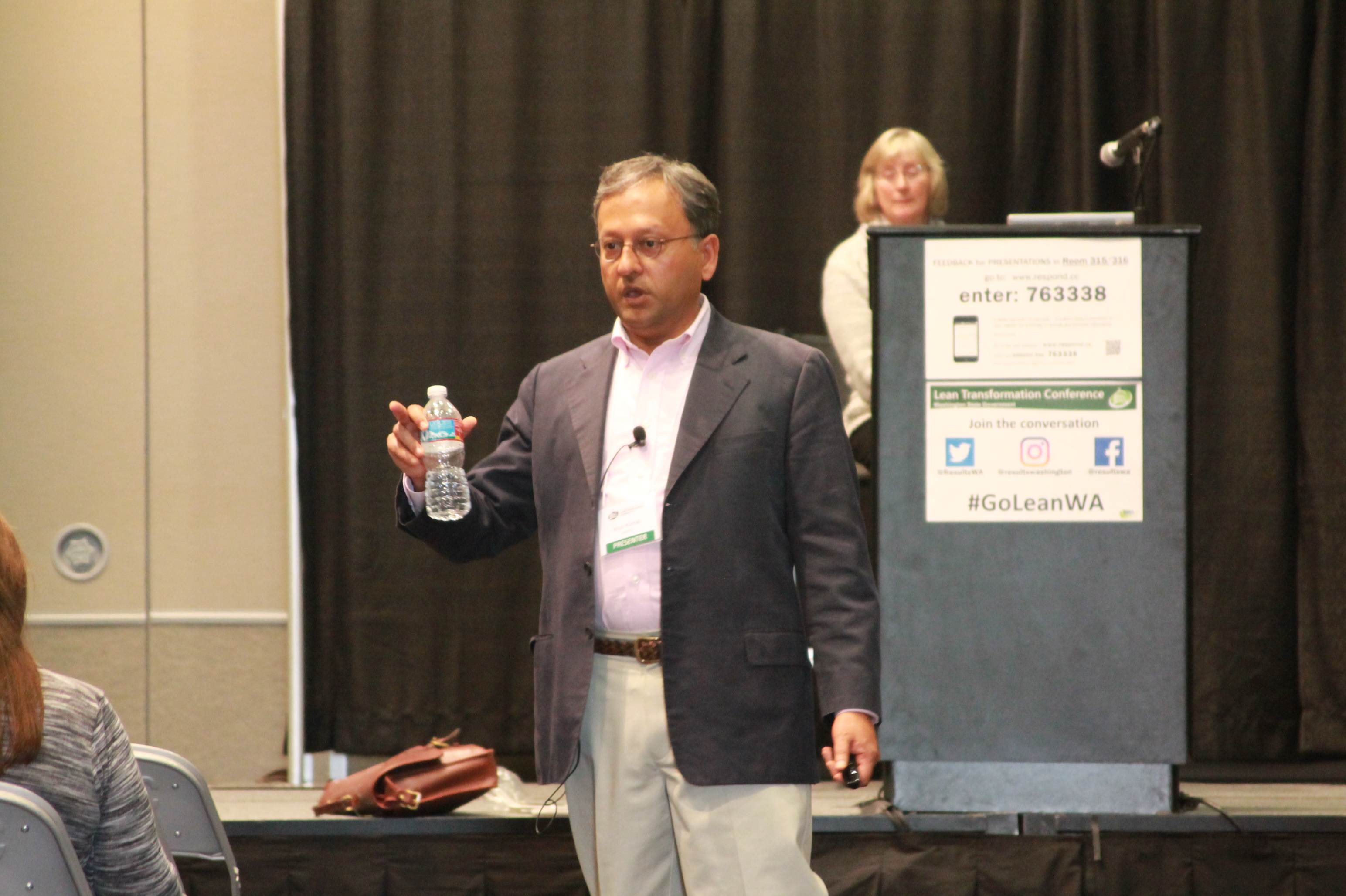 The subject of the talk was “Collaboration Across Organizations: Big Results with Small Teams”. Here are the slides from the talk:

Collaboration across boundaries from Arun Kumar

Arun Kumar, Kerika’s CEO, gave a presentation on Visual Workflows at the Lean Transformation 2015 Conference in Tacoma, Washington, which was very well received.

Here are the slides from that talk:

Can you see it now? visualizing your lean and agile processes from Arun Kumar

Once again Arun Kumar, Kerika’s founder and CEO, will be speaking at the annual Lean Transformation Conference organized by Results Washington.

This conference is all about Lean and Agile in the public sector: thousands of folks from state, county and local (city) government agencies will be attending, and as usual Kerika will also have a display booth on the 5th floor of the Tacoma Convention Center.

Arun’s topic this year is “Can You See It Now? Visualizing your Lean and Agile Workflows”.

We look forward to seeing our Washington users at the conference; please do stop by our booth or sign up for Arun’s talk!

Highlights from his talk:

On the Office of the CIO

“The reality is, a lot of the cloud providers can provide better security solutions than we can afford internally.”

“For us, cloud is actually one of the strategies for increasing security for the state.”

“The interesting question is, how do you do oversight and QA — really project management QA, not just traditional software QA — in an agile context?”

“One of the metrics for Agile QA: is the business engaged?” (Not just steering committees like before, but do we really have engaged product owners.)

“Downside of holacracy: everyone loves to tell me that I am not the boss of them”

“No government has ever practiced holacracy before.”

“Holacracy has never been practiced with a represented workforce before. (One with employee unions.)”

“I have been practicing holocracy for a few months, and I feel like I have a different set of lenses through which I look at work.”

“When I talk to people who are not practicing holacracy, I see evil spirits around them, like bureaucracy, office politics, inefficient meetings…”

“We develop these habits to compensate for the deficiencies of a hierarchical organization, instead of trying to change it, and this is after thousands of years of evolution.”

“The team has to want it: you need opt-in for holacracy to work.”

“Imagine trying to play soccer with a hierarchical organization, where the team is run by managers who are responsible for different sections of the field.”

“Because I am the manager, you need to always pass the ball to me. Ridiculous as that seems, that’s how hierarchical organizations work.”

“90% of my time is spent on crap that runs government work, and that’s because of the authority of my position.”

“As a manager I don’t have a passion for a lot of things, but other people might, so I want to give them the authority to take them on.”

“In holacracy, you quickly learn what makes for a valid objection.”

“The type of people who would not respond well to holacracy are managers that derive their self-worth on span of control.”

“There’s a category of employees who have no interest in being self-directed: they just want to be told what to do.”

As part of his talk on Lean & Agile Government, Michael DeAngelo also reviewed a recent Agile QA audit done for the Washington State Office of the CIO by Joseph Flahiff, CEO of Whitewater.

Agile QA report for the State of Washington

Michael DeAngelo, Deputy CIO for the State of Washington (and a long-time user of Kerika 🙂 gave a talk on Lean & Agile Government in Washington State, at the Beyond Agile meetup in Kirkland last week.

Here are his slides:

We will shortly be uploading another presentation, on Agile QA, as well an edited video of his entire talk.

There are a couple of reasons we did this:

At the Jan 12, 2015 meeting of the Washington State Lean Practitioners Community of Practice meeting, organized by Results Washington at the Department of Labor & Industries in Tumwater, Arun Kumar presented Kanban in a Can: Capture, Visualize and Optimize your Everyday Processes.

Here’s the presentation on Slideshare (although most of it was actually a demo!):

Kanban in a Can: Capture, Visualize and Optimize your Everyday Processes from Arun Kumar

The meeting was attended by dozens of Lean experts representing a huge variety of state agencies in Washington!

If you work for a government agency in the United States – at the Federal, State, or Local level – you are subject to various public disclosure requirements, thanks to the Freedom of Information Act and various other federal and state “Sunshine” laws.

(And, if you work for a governmental organization anywhere in the European Union, that’s going to be true for you as well.)

Kerika makes it one-click easy for you to meet you disclosure requirements, thanks to the Archive and Export feature:

Archiving freezes a project, presumably in it’s “done” state: everyone who used to have access to the project still does, but all cards, canvases and documents associated with that project are made read-only.

This means that you now have a pretty good record for what a project looked like when it was completed: what work was done, by whom, and which documents were used and what conversations took place.

And the kind of integrated, comprehensive view of a done project is something that you can get only from Kerika: the old mix of SharePoint and Project and regular email just doesn’t work!

Exporting is the other piece of the disclosure puzzle: with just one mouse click, you can export all (or some) of the cards in a board, in CSV or HTML format.

Exporting in HTML is particularly helpful when meeting disclosure requests because the HTML output can be easily edited, using Microsoft Word for example, to take out items that need to be redacted for security or privacy reasons.

That’s the difference with a modern project management and team collaboration software like Kerika: the worst part of your government job just became one-click easy.